All sprinkler Companies are the same

Jayhawk Fire Sprinkler takes pride in being able to be a one-stop source for all your fire sprinkler system needs.  When compared to the process of outsourcing engineering & hazard analysis, then hiring a design firm, next an installing contractor and finally choosing a contractor to inspect/maintain the system owners find that our ability to design, install and maintain systems saves owners money not only in the upfront construction cost but also over the life of the system.

MIC is a relatively new term that has been associated with a long standing issue in sprinkler systems that commonly is referred to as simply corrosion.

Corrosion/MIC typically reacts when four criteria are present: metal, water, nutrients, and oxygen.  However, some microorganisms can react without oxygen being present.  These microorganisms, which do not require oxygen, are called anaerobic.  While the microorganisms that need oxygen to react are called aerobic MIC is the industry term for microbiologically influenced corrosion.

The discovery of MIC in sprinkler piping has not been an isolated issue.  It has been discovered in many sprinkler applications all across the United States.  It has been found in industrial facilities, warehouses, hospitals, offices, and residential properties.   MIC does not discriminate amongst fire sprinkler system types.  It has also been known to exist in every type of sprinkler system does not only attack wet pipe sprinkler systems.  Often dry and pre-action systems, due to being filled with compressed air, see advanced cases of MIC because of the oxygen present in these systems.  The water that is left behind after flow testing helps fuel the microbiological reaction.  The threat of MIC is becoming so prevalent that many insurance companies are now offering discounts to business owners who take preventative measures against MIC infestations.

A common misconception is that once a system has corrosion that the best way to remove it is to replace the damaged piping.  While that may be necessary if the piping is too badly damaged and is a liability, in many cases we see that new/fresh sprinkler piping installed into an existing system with active corrosion will actually be attacked more aggressively.  It acts as fresh food for the bacteria.

There are new methods available to help prevent MIC and there are ways to eradicate MIC in existing systems.  Water tests can be preformed to see if MIC causing bacteria is present in the water supply and test can be preformed on the pipe being used to determine which treatment is needed. 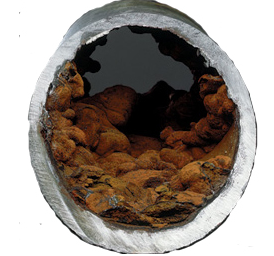 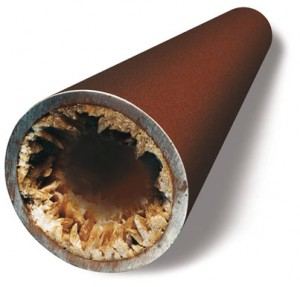 All sprinkler heads activate at once

It’s one of the most popular misconceptions of sprinkler systems and like a lot of misconceptions in this world it’s largely due to Hollywood.  In the movies, a person pulls a handle on a red box on the wall and all of the sudden, every sprinkler head in the building goes off.  This makes for a very dramatic scene as the hero rushes through the water to save the day, but in reality sprinkler systems do not function this way.

There is only one type of sprinkler system, called an open head deluge system, that can act in this way and as it is typically undesirable to have all sprinkler heads dispersing at once, it is not a commonly used configuration.

The majority of sprinkler systems are closed head systems that will only activate in the event of a fire.  Studies show that 90% of all fires are controlled with six or fewer sprinkler heads.

There are choices as to what fire sprinkler systems can be installed, common systems are:

Water damage from a sprinkler system will be much less costly when compared to the costs of a unprotected building.  A typical sprinkler heads produce anywhere from 8-24 gallons of water per minute, a fire hose used by the fire department will produce 50-125 gallons per minute.  In addition to the additional water used to combat a fire by a fire department, the costs by the actual fire also have to be added.  It’s proven sprinkler systems save money in the event of a fire.